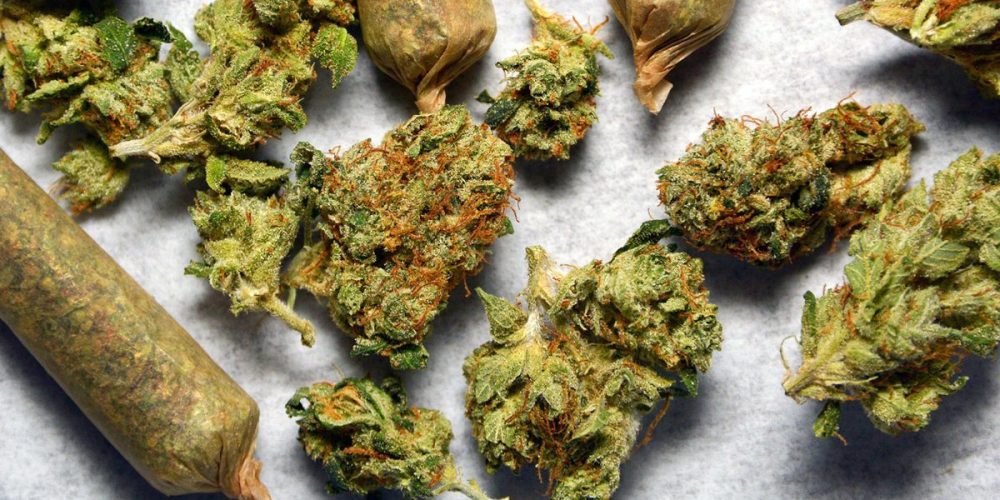 Cannabis has had quite the year. Namely, companies learned the industry is hella lucrative – it’s a multi-billion dollar industry – and politicians gleaned supporting legalization can earn them some political sway. This year also ushered in a massive wave of luxe cannabis products and accessories. It’s safe to say what might have been considered the plant’s edge is now officially sanded and shellacked smooth. But just because something goes mainstream doesn’t mean it’s no longer cool. Look at craft beer! Now cannabis has completed a similar metamorphosis. And five strains in particular reigned 2017 supreme.

Cannabis, like alcohol, has many nuances to consider. Just as you’d never sidle up to a bar for a pint of “alcohol,” you should know more about cannabis than to request simply “weed.” This year saw a rise in appreciation for CBD, a major cannabinoid present in marijuana. THC, the heady component that makes users feel high, is the other major cannabinoid in cannabis. CBD doesn’t affect the mind; instead, it’s jam-packed with medicinal applications, spanning from treating menstrual cramps to epilepsy. As stigma surrounding cannabis wanes, patients interested in non-pharmaceutical treatments have more and more CBD-heavy options.

Keep in mind, even though these strands dominated 2017, cannabis is a highly individualistic experience. The strain that gets your flying phobic cousin calm and airborne might make another user fall victim to a surprise couch nap. As Portland, Oregon,-based Farma collective’s Sam Heywood puts it: “The best strain is the one that suits you today.” So tune in, light up and tune out. Here’s five great options for celebrating the end of one really weird year.

Dark, mossy-colored buds accentuated by pops of deep purple and glazed with tiny dank crystals, GSC’s glamorous appearance is striking. Adrienne Airhart of Los Angeles dispensary The Higher Path calls the indica-dominant hybrid “the ubiquitous party strain.” GSC is a cross of euphoric California staple OG Kush and energizing Durban Poison, which is a pure sativa that summons creativity while relieving symptoms like pain and loss of appetite. GSC also reduces anxiety, making it an obvious go-to for the agoraphobic forced to socialize.

Despite a high THC percentage (between 22 and 30 percent), the strain gets its party reputation because it’s easy to smoke a lot of without going becoming catatonic. GSC has subtle mint chocolate flavor notes – not unlike Thin Mints themselves – which led to the initial name. But that was forced to change after Girl Scouts USA sent a cease and desist letter to Oakland, California’s Magnolia Oakland collective. Either way, cannabis database powerhouse Cannacopia called GSC one of the year’s most-searched strains by its users.

Perhaps the champion of sofa-anchor strains, the aromatic GG4 cranks user relaxation to 11. On its fourth iteration, GG4 gets its name from extreme stickiness (that’s the THC sticking to pistils, making crystals called trichomes. High concentrations of trichomes will make bud look frosty) and tranquil weight (you get “glued” to wherever you smoked it). When rolled up or sparked in a bowl, GG4 emits plumes of earthy smoke. Its use promotes cerebral sedation. This potent, indica-dominant hybrid almost never happened; Gorilla Glue, the mother strain kicking off the celebrated family tree, was a surprise baby. A hermaphrodite Chem Sis (the sativa-dominant Chemdawg variation) pollinated a chatty Sour Dubb. Growers crossed the seeds born of that with heady Chocolate Diesel, thus bringing this powerful, dreamy strain into orbit. GG4 took home second place in Best Hybrid Flower at the 2016 Colorado Cannabis Cup, its win spilling into a welcomed 2017 pervasiveness. GG4, like GSC, suffered a copyright infringement lawsuit spearheaded by glue brand Gorilla Glue, forcing its name change. (GG Strains and the adhesive company settled in October.) Just a shame its alternative moniker, Trump’s Hair Glue No. 4, has yet to catch on.

Originally developed in 1990, Green Crack enjoyed a spike in popularity in 2017. The energizing strain was bred from 1970s-born Skunk No. 1 and an unknown Afghani sativa, making it the cannabis equivalent to a cup of strong coffee. Since Green Crack’s effects are short-lived, it’s a formidable daytime smoking option, necessitating multiple joints every few hours to stay stoned. It boasts a mellow flavor, rounded out by limonene and pinene terpenes, among others, that leave a citrus-infused, piney mouthfeel. Terpenes don’t just dictate smell and taste, they steer cannabis’s effects. In this case, the limonene helps manage depression while pinene can calm asthma symptoms. It, like all other strains, isn’t for everyone; some people say smoking Green Crack makes them paranoid. And despite more than three decades of being in puff-puff-pass rotation, its name remains controversial. Some collectives and cannabis aficionados prefer to call the strain “cush” (not to be confused with “kush,” an indica strain originating from the Hindu Kush mountain range) to differentiate it from dangerous freebase cocaine.

Sometimes marked my fiery orange hairs, this sativa is like the Kool Keith of green – it has about six acceptable nicknames, mostly inspired by its hometown in Alaska’s Matanuska Valley area. And like Dr. Octagon, ATF is a slow-burner; its heavy-handed THC (usually about 20 percent) moves like a slow shutter speed to thwap users in the noggin. Once it’s there, though, the high is uplifting. Thunder is a good daytime option, stirring creativity without bringing on too much chill. It’s sometimes criticized for its smell, which can be akin to ammonia. Luckily, its flavor does not at all reflect its aroma; Alaskan Thunder Fuck hits the tongue with spicy, slightly diesel-tinged citrus flavors. Speaking of tongues, this strain provokes serious munchies, so be sure to grab some snacks along with your eighth.

Interest in CBD in general surged this year, ushering folks weary of THC’s psychoactive components into the wonderful world of cannabis. Israel’s first medical marijuana supplier Tikun Olam (Hebrew for “repair the world”) developed this strain that has almost no THC at all – one percent at most – but a whopping 18 percent CBD. In fact, most people won’t even feel stoned after smoking or vaping. This makes Avidekel more accessible to those who are not at all interested in a heady high – it’s just the body, making the strain less intimidating and paving the way to instant relaxation. The indica-dominant is an antidote to insomnia for many, but Avidekel also treats digestive issues and inflammation. It’s been called the most potent type of medical marijuana, and took home two awards from the 2017 Canadian Cannabis Awards: first place in both Top High-CBD Flower and Top High-CBD oil.