post-title Will U.S Airlines Ever Serve Marijuana On Planes?

Will U.S Airlines Ever Serve Marijuana On Planes? 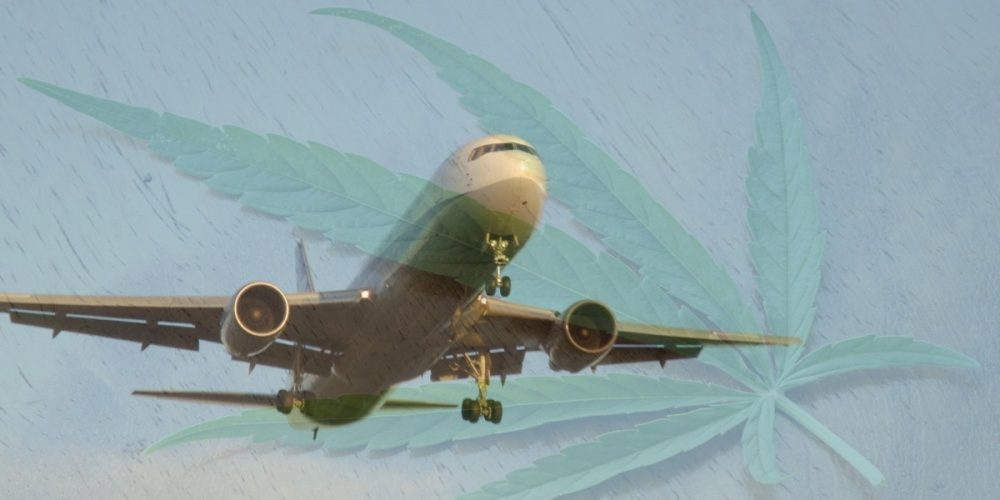 Will we ever get to a point where nervous flyers can buy cannabis products on a plane?

Anyone who has ever traveled via commercial airline has likely witnessed an anxious passenger rubbernecking the flight attendants to see if they’re anywhere close to rolling out the drink cart. If you watch them closely, many will have their credit cards firmly gripped long before the captain ever has a chance to turn off the seatbelt sign. It is almost as though the prospect of simply paying for a stiff drink is enough to calm their journeyed nerves. But then again, catching a buzz thousands of feet above Earth has become as much a part of this method of travel as security shakedowns, lost luggage and jet lag. Especially when traveling coach. In fact, alcohol has been a part of the airline scene since before the dawn of the drug war. But this alcoholic amenity hit its fair share of turbulent times. Which brings us to the following question. Will there ever come a day when airlines graduate from selling only booze to also offering marijuana on planes?

Although marijuana is legal for medicinal and recreational use in well over half the nation, it still remains an outlaw substance in the eyes of the federal government. Uncle Sam and his dastardly pack of drug-sniffing hounds at the U.S. Drug Enforcement Administration consider the cannabis plant an illegal substance. Therefore, it is presently ranked under the Controlled Substances Act as one of the most dangerous drugs in the world. It’s right up there with heroin. This detail is what prevents commercial airlines from even beginning to consider selling cannabis products aboard the 87,000 flights that finagle their way across American airspace every single day. Not even those airlines operating in legal states have the authority to offer marijuana on planes.

This is a confusing situation for some. The Transportation Security Administration (TSA), part of the Department of Homeland Security, has indicated for the past few years that it is not worried about passengers with marijuana. But the agency’s position on this issue only relates to security screenings. Not flights. As it stands, anyone caught with marijuana during a preflight inspection is turned over to local authorities. In a legal state, the TSA can force the passenger to forfeit their weed before permitting them to board the plane. Yet, in jurisdictions where prohibition is the law of the land, pot possession can get a traveler arrested and tossed in jail.

Although there is an old Federal Aviation Administration (FAA) regulation from the 1970s that some have interpreted as permission to carry marijuana on planes, more clarification is needed. What is clear is that flying the friendly skies in possession of marijuana is a federal offense. Of course, this hasn’t stopped anyone from doing it.

But Alcohol Was Once Banned on Airplanes

Before the 1950s, it was unheard of for U.S. airlines to serve alcohol on flights. Even when a select few airlines began experimenting with the sale of beer, liquor and wine as part of their travel amenities, conflicting liquor laws didn’t allow the booze cart to stay open above certain states. The federal government had repealed alcohol prohibition. But there were still a number of states that refused to take part in the taxed and regulated scheme. So while it was perfectly legal for passengers to consume alcoholic beverages above states like New Jersey, they had to finish up their drinks before crossing over into Pennsylvania. Flight attendants had a list of restrictions on when and where they could serve alcohol. The rules banned booze service at certain times of the day (and that differed depending on the state). They could pour absolutely no drinks on Sundays, election days, and even some holidays. By all accounts, this made catching a buzz on an airplane a little more difficult than it is today.

There was a time shortly thereafter when Congress even considered banning the sale of liquor on domestic flights. This was after some airlines began to experience problems with intoxicated passengers. Most airlines agreed to limit the sale of hard booze, but all refused to stop selling beer and wine. Lawmakers eventually introduced legislation to bring prohibition back to the friendly skies. But that bill was killed with prejudice in the U.S. Senate.

Will we ever get Marijuana products on airplane?

Considering how far alcohol has come over the past several decades with respect to its place on domestic and international flights, it stands to reason that marijuana could eventually get a slice of the mile high SIN market. All planes became smoke-free by the end of the 1990s. But there are still plenty of opportunities for the cannabis trade to capitalize on high fliers. Edibles and other socially acceptable THC-infused products are most likely.

But this is going to be a slow process. Congress will first need to repeal marijuana prohibition and set the stage for a nationwide marketplace. From there, it will be up to the individual states to either get onboard with the change or continue to try and enforce pot-free laws. Some will be slower than others to embrace this concept. Nevertheless, it is possible that marijuana would then begin to creep into the realm of air travel. Of course, it will almost certainly begin with the same ridiculous rules as alcohol was once held to. But it will eventually calm down and become a normal part of the travel adventure. It is also likely, by then, we will see the emergence of pot-friendly airport lounges. Airlines serving marijuana on planes are coming. Just not until the federal government ends prohibition.

If and when this reform comes to pass, the cannabis industry could easily generate tens of millions of dollars by partnering with the aviation industry.